Aka "Lessons Learned". But first, lets go back to the beginning...

The Expo-great. Not too big or difficult to navigate, and no crazy lines (though this may have been due to the fact that I went less than an hour after it opened, when lots of people were still at work). Plus, getting my corral assignment changed (insert ominous music here) was no problem. There were some great sales on running gear and I could have blown a ton of money but managed to limit myself to a few headbands (Chica Bands, which are pretty similar to Sweaty Bands) and a shirt (in addition to the below race shirt, which is pretty nice). 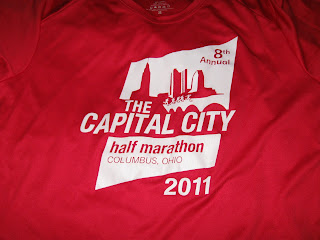 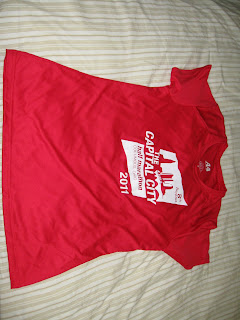 The night before the race was uneventful. I picked up some mini chicken gyros from Greek Express (mmm, drool), came home, ate, hung out, and got my stuff laid out for the next morning. 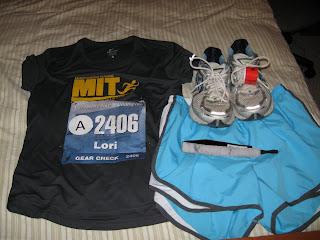 The sticker next to my number refers to my changed corral assignment. I was feeling ambitious and got switched to a faster corral. Cue more ominous music.

I slept pretty well, and was up on time in the morning. Hit a little bit of traffic getting to where I wanted to park, but nothing major. Found my training group's meeting place, got my bag put in the truck to get taken down to the tent set up in the finish area, and headed over with a girl from my training group that I know from our speed workouts. She was in the same corral as me (her goal was a 1:45 finish, mine was sub 1:50) so we walked over to the start, found our corral, and got situated closer to the start than I've ever been. Which was kind of scary, but super exciting at the same time. We started right at 8am, and off we went!

The first four miles were fab...I was rocking 8:00/mile pace, which was faster than I'd planned on running but I was feeling good so it would be fine. Right?

At about mile 5, my legs ran out of gas...hardcore. So I slowed my pace, which helped for a little while, but eventually I had to suck it up and do the unthinkable (for me, at least). I slowed to a walk for a bit. Less than 1/10 of a mile, but still. I was hoping that this short walk break would miraculously restore all the juice to my legs, but alas...it was not to be. I spent the rest of the break taking a short walk break or two each mile, as the fatigue in my legs (specifically, my quads, got worse and worse). Even at a slower pace, it was like my legs forgot all the training I had done over the last four months. And it sucked.

I do have to say, the race itself was awesome. The start and finish areas were extremely well organized, the hydration stations were plentiful and very well staffed, and the crowd support was awesome. My favorite signs were from the staff of the local Lululemon store...the only one I remember off the top of my head was the one that said "Don't poop.....out" but they all gave me a much needed chuckle.

So, lessons I learned? The biggest one, of course, is DON'T GO OUT TOO FAST. A little ambition can be a good thing, but too much ambition is not and will come back to bite you in the ass. This was likely the biggest contributor to my undoing yesterday.

The other thing I learned is that apparently I was not as well hydrated as I thought I was. I stuck to my usual routine of stopping for water at every other water stop (which in this case worked out to every other mile) and taking my Shot Bloks around mile 7, but with the slightly warmer than I would have liked temps yesterday it (and the hydrating I did in the days leading up to the race) apparently wasn't enough. After the race, I didn't feel horrible but I felt very bleh. A couple of bottles of water helped, as did some Gatorade when I got home, but I noticed that even after taking a shower my face felt dry and tight like it does when I'm hung over...and therefore dehydrated. So if I felt like that AFTER bottles of water and Gatorade, I'm thinking that I was more dehydrated during the race than I realized.

Overall, yesterday was a huge reminder that your training can go great, you can think you're doing everything right, and it can still all fall apart come race day. But in the end, you survive, and you learn. And sometimes, you get a big.ass.medal out of the deal. I mean, LOOK at this thing! (and forgive the fact that the picture's upside down, please) 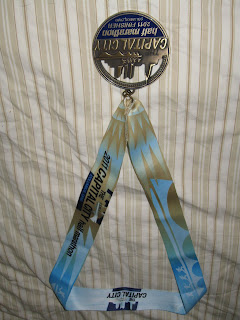 So, what's next? A lot of taking it easy and getting back to running for the hell of it and not because my training program says I'm supposed to run x miles on x day. More biking and swimming, and enjoying my summer :) I'm still planning on sticking to my "not training for a fall race" mantra, but admittedly after the way yesterday's race went I can feel my resolve waning juuuuuuuust a teeny bit. So we'll see what happens...

Ugh... we went through the same thing! You finished strong... we have to remember that! And there will be other fast races in the future!!!

Congrats on your race. Sorry you didn't hit the time you wanted, but I guess there are justs ups and downs in racing that you've got to deal with.

Sorry that your race didn't go as planned. I think that we've all been there and it stinks.

Chris and I were commenting about the weather here that day, he said something to the effect of "Do you feel how warm and humid it is? You wouldn't make it two steps running today." Exactly.

I'm sure that you'll kill it next time!

Congrats on your race! I've been following along with the runners on the nest and everyones such an inspiration I'm starting the C25k! I started blogging and will doc my experiences, so please follow along, and any tips and advice are greatly appreciated!

Lori
Jason and I got married in July 08, and bought a house in October 08. I like to run, cook (well, try to), shop (with the zero money I have, thank you homeownership), and gallivant around with my friends. I work with kids with special needs and love what I do most of the time, and when not working with said kids, I have a very foul mouth. I'm trying to work on it, but will cuss with abandon as needed. If you don't like it, bite me.

That cool shit in the background is Mystic Falls, at Yellowstone National Park. We went there on our honeymoon. I know, youre jealous...it's okay.